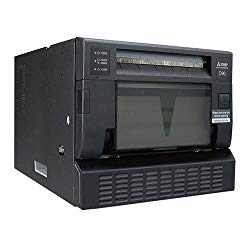 Mitsubishi Electric designed and built the CP-D900W photo printer as a compact, full-featured printer offering event photographers and photo booth integrators the best and most featured model in Mitsubishi's line of high-speed printers. Mitsubishi's CP-D9ODW dye-sublimation printer that requires minimal installation space while offering maximum flexibility and print output given its size. Note: SelFone Wireless Print Station WiFi adapter sold separately D90-WIFI-1 Capable of printing FOUR different print sizes from a single roll of 6" media, users can easily choose 2x6, 4x6, 6x6 and 6x8 prints from the very same roll of 6x8 media. The Mitsubishi CP-D9ODW is a powerful printer with on-board digital image processing, allowing end-users use devices with low computer power such as stick-PC's and NUCs to run the printer using its available drivers for Windows version 7 or higher in 32/64 bit, MAC OS or Linux x86 based computers. These connected devices can then be used as the portal to interface between the printer and other devices, enabling myriads of other functions such as wireless transfer of photos, etc. The image processing is off-loaded to the printer, letting the computers with lower computing power focus on the other tasks and still produces a fast print high resolution images in glossy or matte finish. The CP-D9ODW printer is also designed with two built-in power ports: a 12V DC output and a 5V powered USB port, one of

Do you want ot get the Mitsubishi CP-D90DW Hi-Tech Dye-Sub Photo Printer?

We use cookies to give you the best experience on our website.I accept